In this post, I will go over the changes I needed to make in order to port a Web3.js based Ethereum web app I had previously blogged about to use Polkadot.js and Substrate.

Almost 2 years ago, I was still on my journey learning about Ethereum, when I built a simple web application using Web3.js. At the time, there was a spawn of viral “ponzi scheme” smart contracts, and I wanted to see how these dApps grew and eventually crashed over time.

Since the launch of Kusama, there has been a lot more activity around actually using Substrate, specifically among the validator/nominator community. I wanted to take a look at the my nomination rewards over time, and to do that, I basically needed to rebuild this same application, but using Polkadot.js… (sneak peek)

Here is that journey.

The first issue I ran into when trying to migrate from Web3.js to Polkadot.js was generating a standalone JavaScript bundle so I can simply include the dependencies into my barebones project. At the moment, Polkadot.js does not provide an official bundle, but it is easy enough to create with browserify.

Assuming you already have npm, here are those steps:

You should now have a polkadot.js file that you can include into any HTML page and will export api, util, util_crypto, and keyring commands.

Actually, you can find it on this page too! Just open your browser console and try any of these commands.

If you don’t want to follow these steps, feel free to grab the polkadot.js bundle I created at: shawntabrizi/substrate-balance-graph.

Connecting to a Node

As a front-end developer, I am not so interested in setting up a local node, to get my app to work. In the Web3.js world, I would use Metamask + a dedicated infura node. From my Ethereum web app (ethgraph):

The polkadot-js/extension does not inject a WebSocket provider automatically, so we can skip the “detected” step, and just connect when we know we are not connected. Substrate is also not just a platform for one chain, but many chains, so I wanted to also support the user user customizable endpoints.

I created a connect function which looks like this:

You can see I keep track of two global properties:

When I call connect, it will make sure I am connected to the endpoint I want based on the input of the endpoint element on the HTML page. For a network like Kusama, this endpoint would be something like:

At the time of creating ethgraph, Web3.js did not support async/await. Instead, I wrapped everything in a “promisify” wrapper. Fortunately, Polkadot.js supports this natively, so you can query every API easily and ergonomically with a promise.

For example, here is how we can get the balance of a user:

To provide all the functionality of the Ethereum version of this app, I also need to query the timestamp of a block. Ethereum would include this in the block header, but we know that Substrate has no such requirements, and instead provides this through another runtime module:

Great! But how do we get the historical information?

In Ethereum, we could just provide the block number directly into the query:

In Polkadot.js we need to use the .at(hash, <PARAMS>) API, which extends all the Substrate queries. hash here is the block hash of the block that I want to get the information for. To get the block hash, I need to make an RPC call through the Polkadot.js API:

So all together now:

You can see I gained quite a bit of free balance since block 0! :)

So we have all the pieces to be able convert our old queries into the new ones. However, if we do things naively, we will run into a trap which was warned about in my last blog post.

Let’s take a look how a naive conversion between Web3.js to Polkadot.js would look like:

First, we should call out how incredibly similar the two code blocks look. The naive update is totally working, and really we did not have to change our app at all! But if you are trying this at home, you might notice the app is running pretty slow… over 30 seconds to fetch the data needed to create the graph! 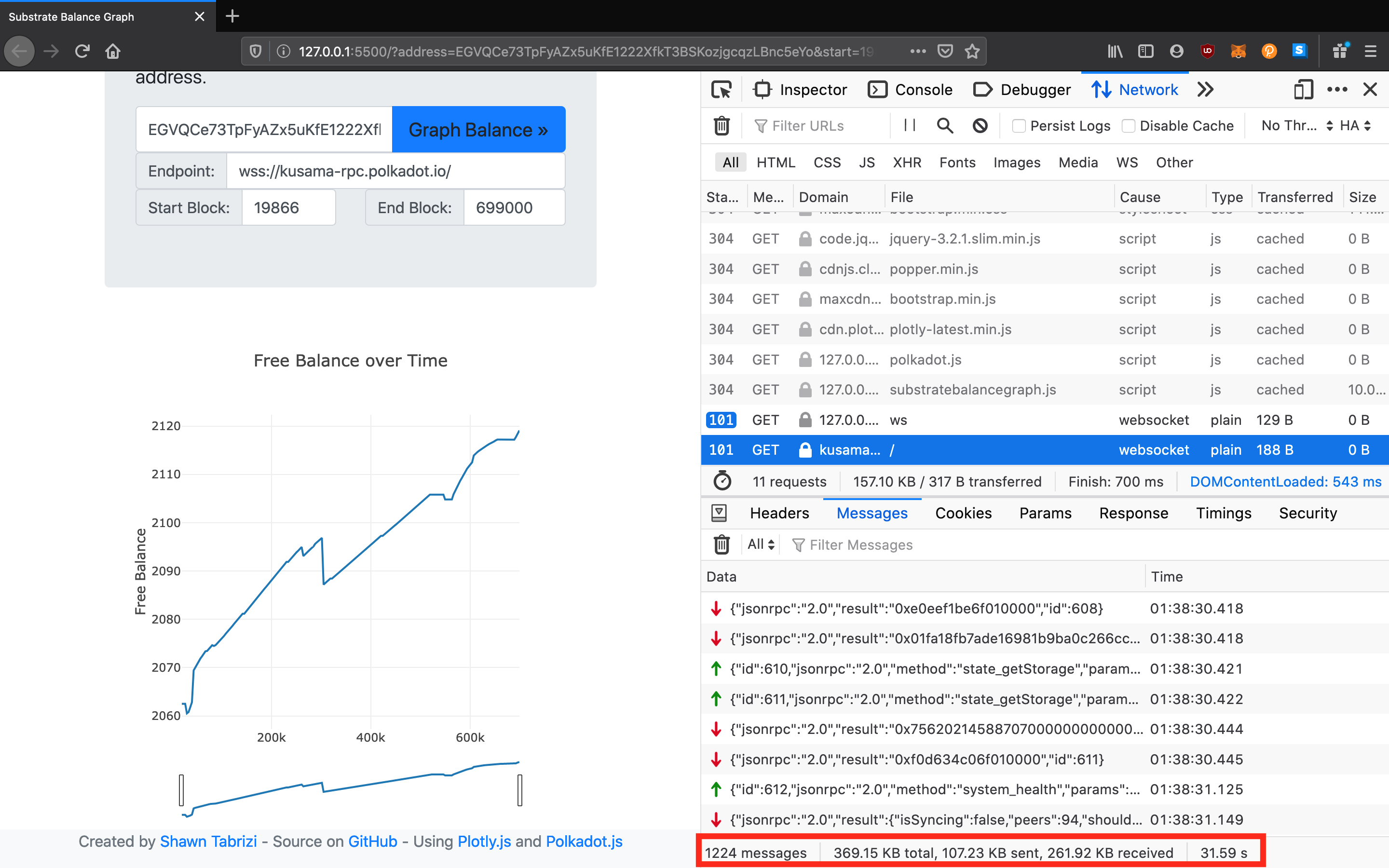 The point of this loop was to collect all the queries and run them asynchronously. As mentioned in the last blog post, this provides a huge boost in performance since we are not waiting for each response to move onto the next one. However, this naive conversion sticks an await right in the middle of the loop, and this causes us to serialize querying for all the blocks, and slow down the entire processes.

To solve this, we want to also query all the block hashes for the blocks we need in parallel, but in a separate loop, because we need to know the hash before we can make the next query.

This generates a graph for us in under 2 seconds! 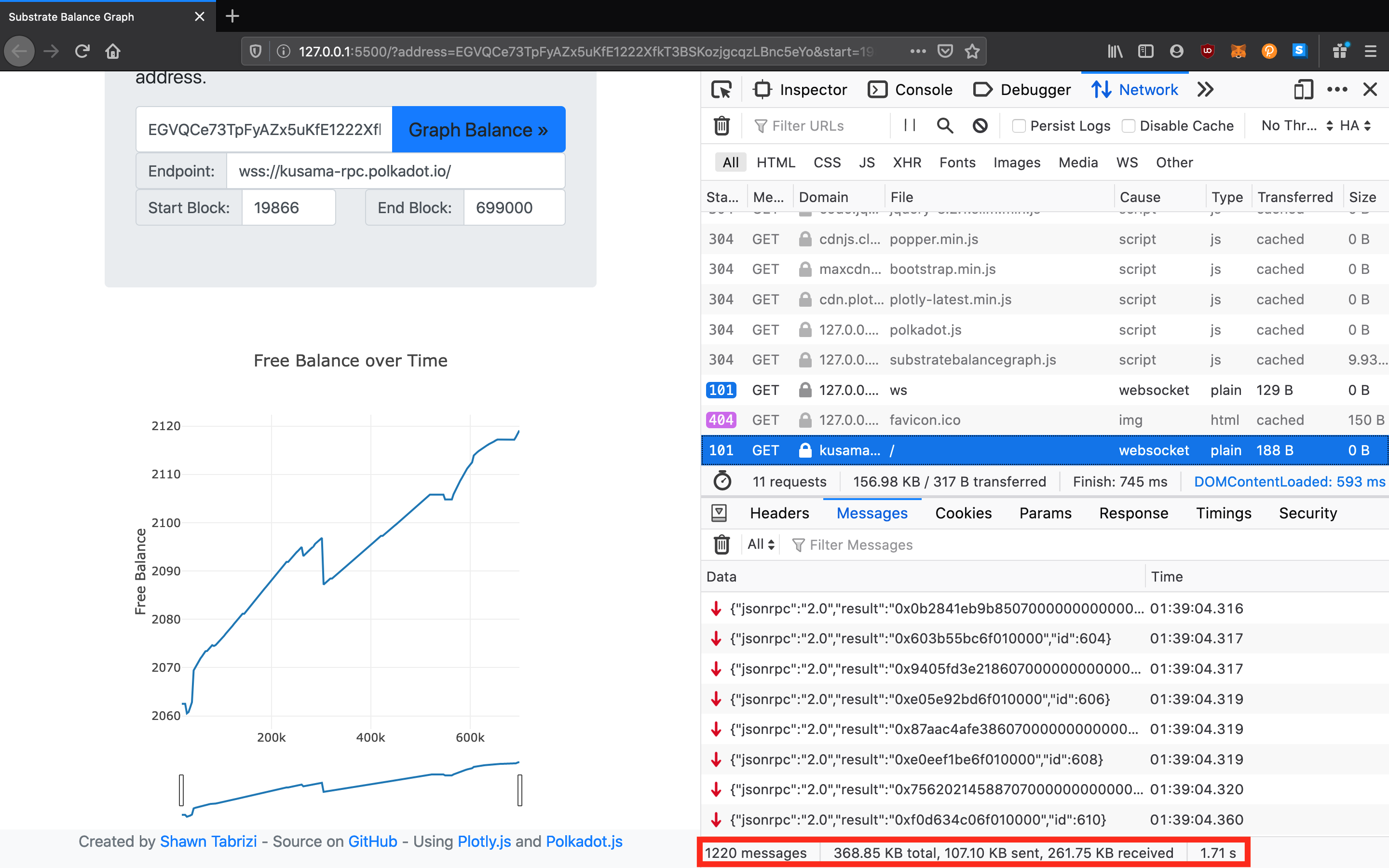 Much better, and what you would expect from a modern web application! But here we don’t have a traditional database, just a blockchain.

You can play with the final application here: https://www.shawntabrizi.com/substrate-balance-graph/

After this exercise it has become clear to me that porting existing web applications built with Web3.js to Polkadot.js is trivial. Additionally, I already have a ton of experience with Substrate runtime development, so I already know how easy it will be to take existing smart contracts and build them on Substrate, maybe even better than before.

With that in mind, it won’t be long until we see a wave of existing dApps joining Substrate/Polkadot, taking advantage of all the next generation features without making any compromises toward their existing functionality. The future seems bright overall, and I am excited to be at the forefront.

As always, if you like the content I create, stop by my donations page and say thanks!

This blog post has an associated GitHub project: substrate-balance-graph